skip to main | skip to sidebar

Finally some new art! A few frames from a comic I'm slowly writing & drawing. It's going very slowly, but I am really enjoying learning to write, design, letter & ink, for realz! Using mostly Photoshop CS6, some real ink & paper, Manga Studio 4EX, and Comic Life 3 to letter and pull it all together. Here is a link to CL3. It's better & more powerful than it looks:
https://plasq.com/apps/comiclife/macwin/ 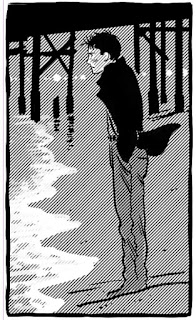 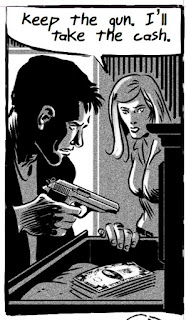 The guy on the beach was ink on paper. Experimenting with tones in Photoshop. I've always liked the strange duotone of the old Craft-tint board. The guy with the gun & the girl were inked in Manga Studio. The rest of the frame is Photoshop. The money looks way too digital, but it reads, so I may leave it.

This was mostly done in Photoshop. I traced the car, experimented with more tones, and eventually cropped either side to tighten the composition more than you see here. I like the atmosphere for the story, but this level of elaborate illustration is murder to sustain in a comicbook, so I probably shouldn't keep trying this.

This was a previous version. I kinda traced her figure from a photo, and carefully invented light and shadow inking in Manga Studio. They are supposed to be desperate & hitch-hiking. This frame was a lot of work, but once I stepped back to look at it, I realized it was just a lazy composition. 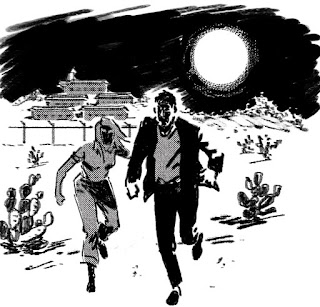 This was inked and toned 100% in Manga Studio. My work is always painfully stiff, so I'm happy how rough this looks. I was channeling my favorite early 60's NY illustrators I'm sure! 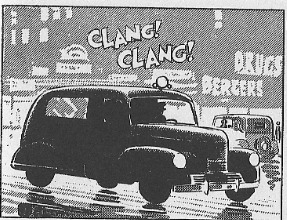 No, I didn't draw this one. That's the great Roy Crane, from Buz Sawyer, February 6, 1946. Wish I could do it like that! Here is a video preview of that great book:
https://www.youtube.com/watch?v=MOxEoomkzvY

Posted by Movieboards at 7:09 PM